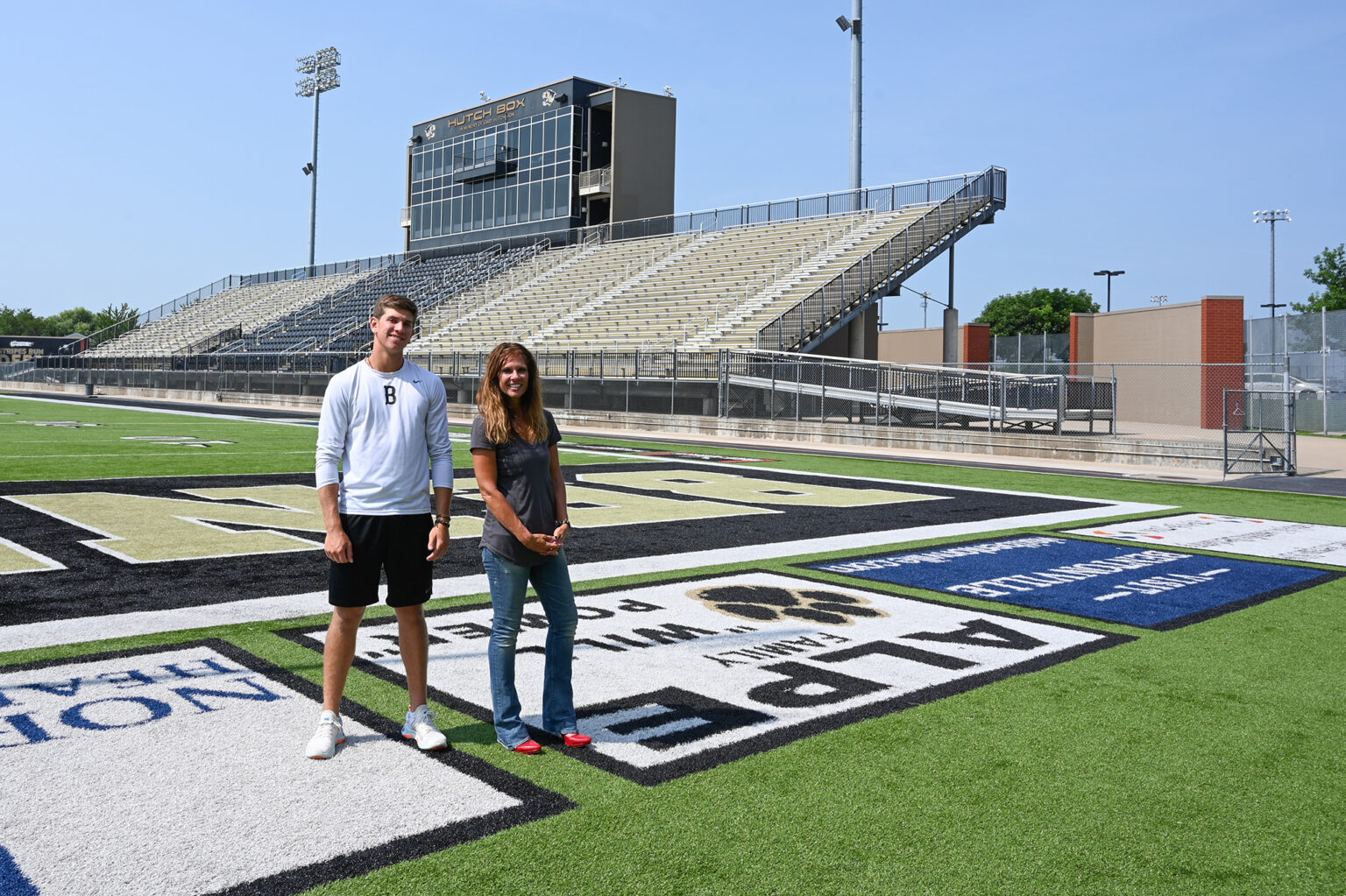 Arkansas roots run deep for the Wright family of Bentonville, Arkansas. Robin Alpe Wright grew up in Bentonville and graduated in 1994 from Bentonville High School where she played basketball and slow pitch softball.  Wright’s husband, Dan Wright, grew up in Batesville, Arkansas and came to the University of Arkansas and played for legendary Arkansas baseball coach Norm DeBriyn from 1997 to 1999. Dan pitched in the major leagues for the Chicago White Sox and is now a Major League Baseball scout. Their son Drew is currently a two-sport athlete at Bentonville High School playing both football and baseball.

The Wrights have a special bond with the school district- not only being a part of the district as a student or player, but also as the sponsor of the Will Alpe award. The Will Alpe award was created to keep the memory alive of Robin’s younger brother who passed away from leukemia when he was in the sixth grade. Will was attending Old High elementary in Bentonville at the time. Today, they continue to award a deserving student at Old High a scholarship in his name. “Will gave so much to our family and then back into the school system. He was happy during his chemotherapy and would play practical jokes. Back then, you could take air horns into sporting events and Will had one and he definitely used it. He continued to attend all my games during his treatment. We are so thankful for Bentonville Public Schools. We are able to talk about Arkansas Children’s Hospital and how wonderful they are in making strides with childhood cancers. We give the award to the child, and we give a thousand dollar grant to Old High,” Alpe Wright said.

Alpe Wright enjoys reminiscing over her years as a Tiger and a Razorback and loves watching Drew excel in high school sports. Drew is entering his senior season and is glad to have parents that played at his level. “They’ve helped tremendously. My mom is my biggest fan and she’s been a great supporter over the years. She comes to every single game that she can. She’s always encouraging me and helping me when I’m down on the games that aren’t the best,” Drew Wright says. “My dad has helped me with baseball a lot. He’s taught me the best way to play the game. He’s been a huge help with my pitching and hitting mechanics. Both my parents have helped me with my mindset in football and baseball.”

With all that the Wright family has going on– practices, games, training camps, work and all the other things we all do in life, there is one thing they will never forget: Will Alpe’s legacy. “It’s extremely important. I never had the chance to meet Will. Hearing the stories in the years that I’ve known the Alpe family, he was quite a young man,” Dan Wright says. “The award means a ton to the family. They put a lot of work and effort into it. The selection process that goes into choosing the young man or woman every year is very important.” According to Drew Wright, “I’ve grown up with this award. My mom has always told me stories about Will. Even though I never knew him, he’s been close to me all my life because of the stories. It has been great watching my mom through the years work to choose who is going to get the award at Old High. I love being able to be a part of that. The Will Power sign at the stadium is a big part of us because we know you have to fight through things. I know Will fought as long as he could with leukemia. We need to have the same mindset to push through. It’s great to have that reminder on the field.” “Bentonville Public schools has embraced my family,” Alpe Wright said. “They are helping us keep Will’s memory alive. Bad things happen in life, and you must be able to overcome that. Overcoming it sometimes takes heartache. We will always have that reminder of Will’s legacy,” she said. “When Drew was a 9th grader he told me, ‘I am going to get to run out in Tiger Stadium onto the field and I am going to run right over the Will Power sign,’ He said he wanted to take a picture with it. He said, ‘I didn’t know my uncle Will, but I feel like he is up there on the goal posts.’ ”

NEXT LEVEL WITH KIKKO HAYDAR