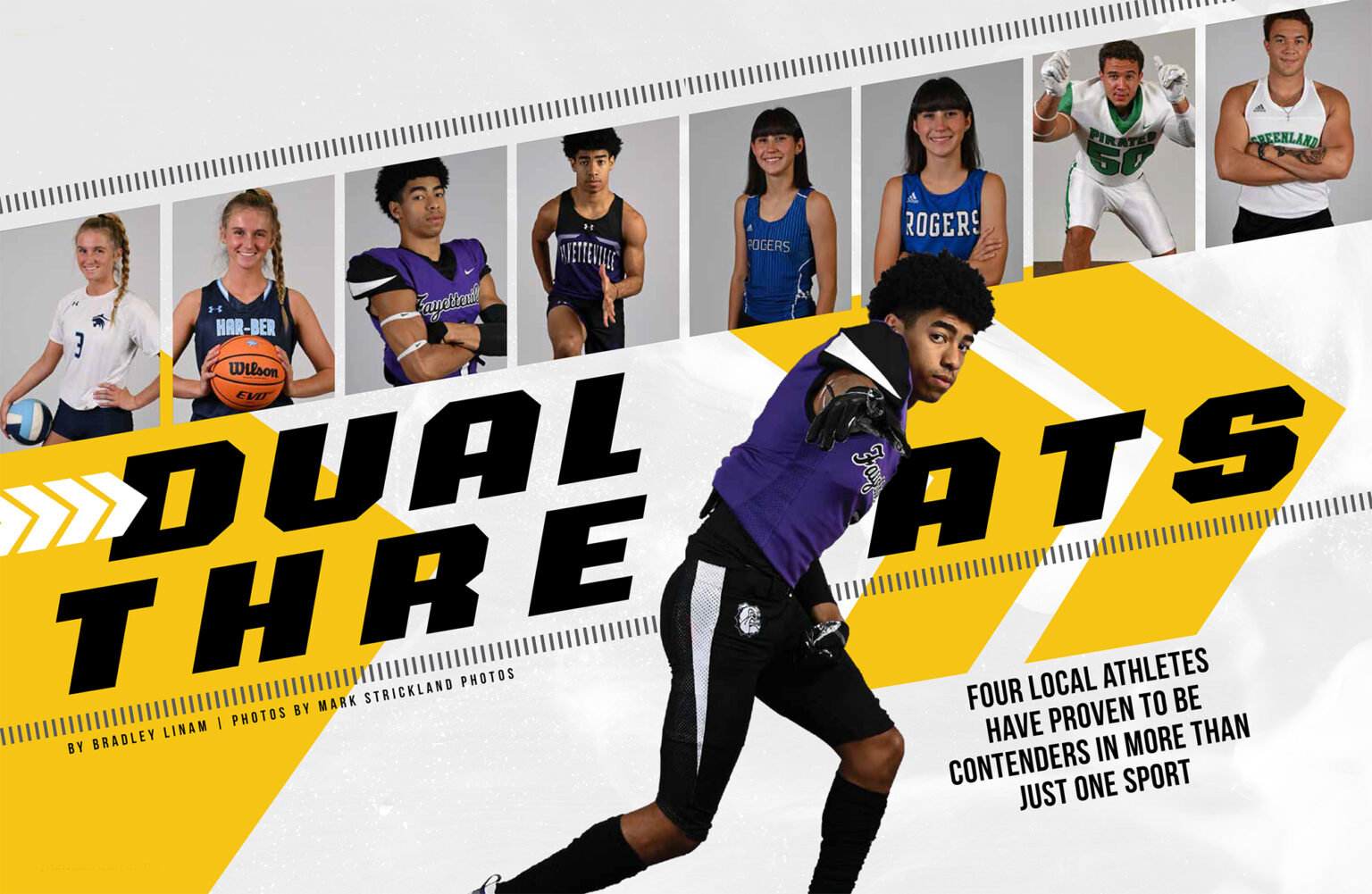 Highly recruited Fayetteville Wide Receiver and speedster Isaiah Sategna led the Bulldogs receiving corps last year with 814 yards receiving. Sategna is a standout at both football and track and has received scholarship offers from almost 30 schools including Texas A&M, Arkansas, LSU, USC, Oregon, Auburn and Baylor, just to name a few. Sategna recently committed to play football and run track for the Oregon Ducks after having previously committed to the Texas A&M Aggies. However, before he begins that journey at the next level, he has some unfinished business at Fayetteville. “Our main goal is to always win the state championship at Fayetteville. I feel like we have the team to do that this year. I think we are going to play more as a team this season and that will translate into more success on the field,” he told us. Track and field is also a big part of Isaiah’s sports life. His father, Mario Sategna, is a track coach for the University of Arkansas. “I feel like he’s the best field coach in the nation. I feel like I have a huge advantage with my dad helping me,” said Sategna.

Seeking out one of the best female runners in Northwest Arkansas proved to be an easy task. It led us straight to Mia Loafman. Her running performance for the Rogers Mounties Cross Country team is receiving a lot of recognition these days. In May, the Sophomore was named the 2020-2021 Gatorade Arkansas Girls Cross Country Runner of the Year. That is an honor that a Rogers Mountie runner has received now three years in a row with Ali Nachtigal securing the honor the previous two years. After her season was over this year, she competed in the USATF National Jr. Olympic meet where she placed 5th and earned an All-American medal. Mia started running cross country in the fourth grade and training is a big part of her success. She has a pre-race warmup routine that has served her very well. “I do a half mile warm-up, stretching, a mile and then striders,” she said. Rogers High School has a great history of cross country success and Mia and her teammates continue to build upon that.

Har-Ber volleyball and basketball standout Caylan Koons embodies the two-sport standout role as well as anyone. Koons has grown up in a sports family, so it is no surprise that she has excelled. “My mom [Southwest Jr. High Volleyball coach Jody Koons] has been a coach since I was very little, so I’ve always played,” she said. Koons has committed to play volleyball in college for the University of Central Arkansas. She credits both volleyball and basketball with helping her stay ready at all times to compete at the highest level in each sport. Having the opportunity to play two sports, she values all of her teammates and coaches and what they bring each and every day. “Coach Jenkins has changed my world. Her first year here I was allowed to play as a freshman in senior high basketball. I’m so thankful to have her in my life,” she said. But she also understands how important it is to enjoy the moment in her high school career. “My coaches told me to stop worrying about things and just play. I’ll be a senior this next season. I’m going to have fun and enjoy every single moment that I get because it’s going to go away soon.”

Greenland High School defensive end JJ Hollingsworth is looking to make a huge impact his senior year. So far, his career at Greenland has been stellar- even with a broken arm that kept his number of tackles per game low (3) as a Sophomore. In fact, Hollingsworth was the first commitment to Coach Sam Pittman’s 2022 football recruiting class at the University of Arkansas. According to Hollingsworth it was a very easy decision to make. He said, “I’ve been an Arkansas Razorback fan as long as I can remember, and my entire family supported me. The day I got the offer it wasn’t a matter of where I was going, it was just when I was going to commit.” Hollingsworth recorded 68 tackles as a Junior, 14 for a loss and 8 sacks. He also excels at shot put, recording a personal best of 43.6 feet last year.