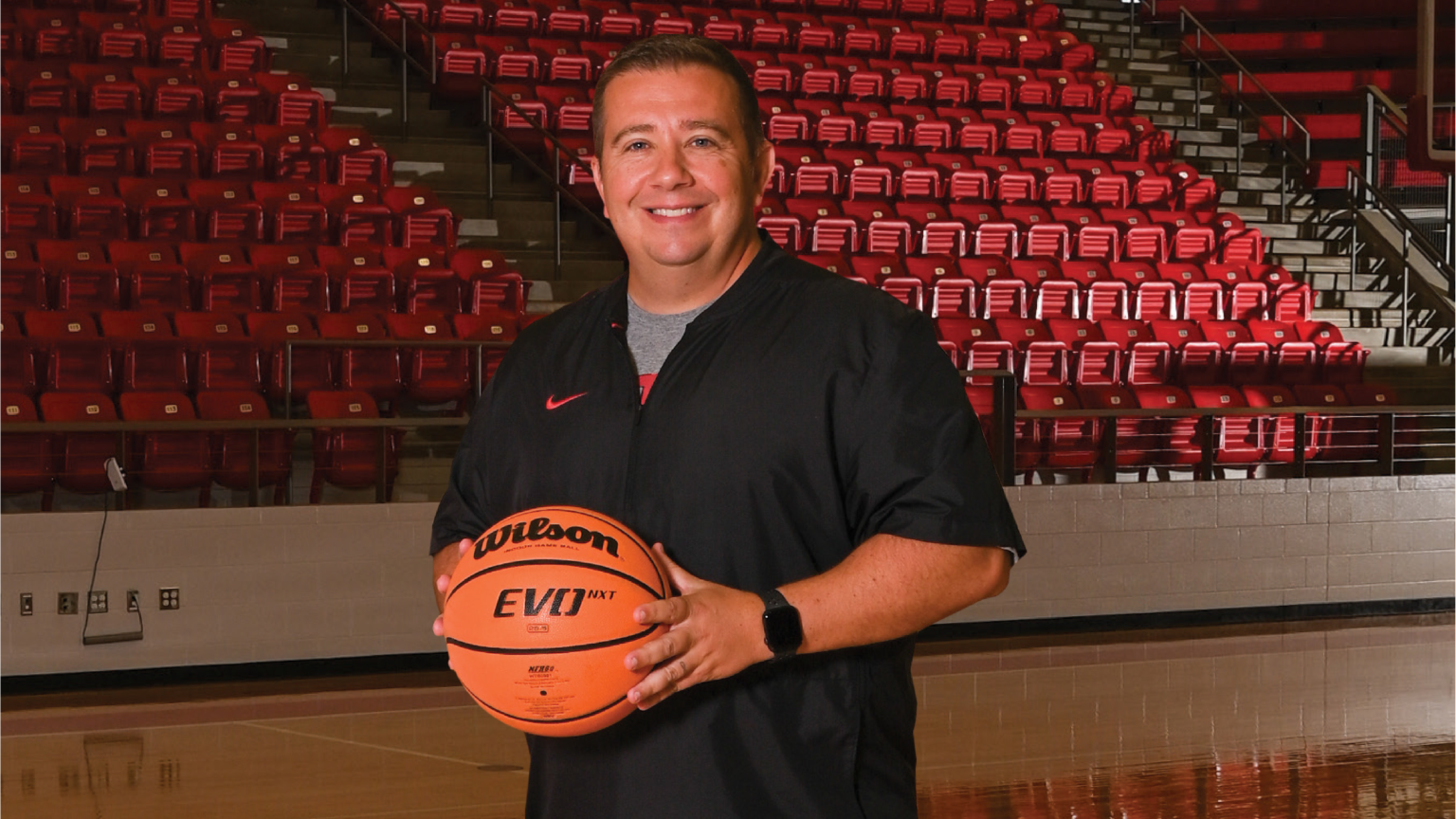 Farmington Lady Cardinals Senior High Girls Basketball Head Coach Brad Johnson is in his 14th year at the helm here. Coach Johnson’s family is important to him with his wife of 24 years, Amber, being what he describes as “the greatest coach’s wife. She’s been my sounding board, biggest fan, trusted critic, and team mom for my entire career. She is what has allowed me to chase my passion in coaching and made sure it was never a job. It has always been our life.” The Johnson’s have three children: Daughters Trinity (19), a sophomore who is playing basketball at Southwest Oklahoma State University and Trianna (18), a freshman at NWACC, as well as son Tripp (12) who is a sixth-grade student at Farmington Public Schools.

Johnson appreciates greatly the support of former Clarksville Panthers senior high boys basketball head coach Gary Thompson when he was initially getting into this business about 25 years ago and reminds that, “I did my internship with him (Coach Thompson) in 1998 when they made their third straight trip to the finals. He helped me in landing my first head coaching job at Plainview when I was 23 years old.” 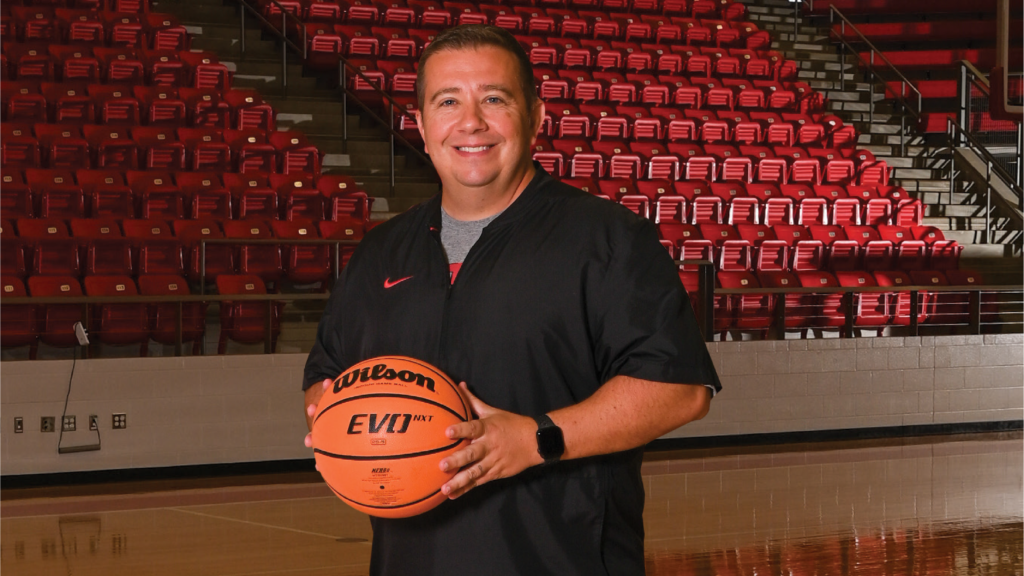 You’ve been the Farmington Lady Cardinals Senior Girls Basketball Head Coach for quite a while now. What makes the school and community so special?

Farmington is such a special community. There is such a passion for the school, for extracurricular activities, and students in general. The pride that Farmington has for its community, the school spirit and all things Cardinals is phenomenal. It’s a welcoming community that loves to celebrate the success of one another. There is a community-wide investment that is unique. It is like a big family.

The 2021-22 campaign was incredible, even though you came up just short of celebrating a state championship. When you look back on last season, what do you believe were the biggest factors in having such tremendous success?

I think, first and foremost, the biggest factor is that it was a team full of players who genuinely cared about one another. Their unselfishness and team-first mentality were authentic and contagious. Every member of the team was totally invested in creating a culture of excellence and valued winning over individual accolades. The next factor, I would say, was the work ethic and commitment to maintaining a standard of excellence. It was important to every single kid to carry on the legacy passed down to them from past teams. They took ownership and pride in wearing the Lady Cardinal uniform. It was truly a special collection of kids and I’m so very proud of all of them.

What are the biggest changes in high school basketball that you’ve seen, most specifically in Northwest Arkansas, since your coaching career first began?

I think the level of basketball in Northwest Arkansas has always been good, but the commitment to providing opportunities for individual player growth, the improved facilities and the media coverage across the region is tremendous and has really shone a spotlight on the sport and continues to support the rise of talent, the depth of talent and the quality of programs in the area.

What do you believe are the greatest challenges in coaching high school girls basketball?

I think the biggest challenge, for any coach in any sport, is to provide a quality experience for their players and to build relationships that impact student-athletes in a positive way. We all love to win, but the most important part of high school athletics is mentoring young people, helping them grow and providing them with a platform to succeed beyond high school. It’s bigger than basketball.

What do you consider your greatest accomplishments as both an educator and high school girls basketball head coach?

I know it sounds cliché but, in all honesty the greatest accomplishment for me personally isn’t tied to wins… it’s watching a team of student-athletes work, improve, invest, and grow together. Those memories, those moments of triumph and the relationships that spring from that lasts a lifetime and are truly unforgettable and priceless.

What do you consider the most rewarding and satisfying aspects of coaching high school girls basketball?

The day-to-day interactions. The building of relationships that last a lifetime. Sharing experiences together… from championships to graduations and weddings, etc. … seeing players go on and succeed beyond high school and beyond basketball is undoubtedly the most rewarding part of coaching.

Who has been the greatest influence from the beginning of your coaching career?

Also, the staff and players that I’ve been privileged to work with, and coach, have all poured into my life. Just at Farmington alone, Jessica McCollough and Denver Holt have been by my side coaching for more than a decade. I have valued their input regarding our program and for years they have certainly made a profound impact on me, both personally and professionally.

What are some of your interests and hobbies away from the court?

I enjoy attending sporting events with my family (wife, two daughters and a son). I enjoy golf, reading about great leaders and traveling.

What are the keys to your Lady Cardinals having another successful season in 2022-23 and hopefully finishing it off with a state title?

The typical things, staying healthy, having a little luck, and peaking at the right time. But for us, it’s always about continuing to grow, maintaining a standard of excellence in how we work, how we prepare and how we compete. And consistently pursuing those things every day. Our league is phenomenal, so we feel like competing in the 1-4A, coupled with a tough non-conference schedule will sharpen us and give us a chance at competing in the post-season.