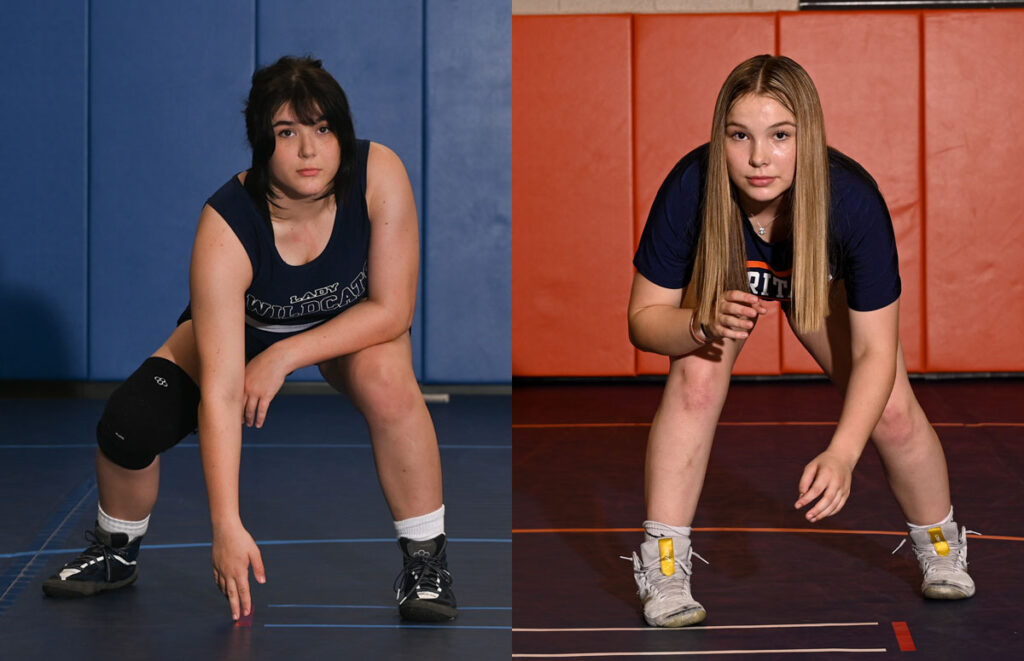 Skylur Lewis and Archer Jones have both been wrestling competitively since they were very young. They’ve both had plenty of success along the way as they won state championships as freshmen in their respective weight classes last season. Before Skylur began attending Rogers Heritage and Archer began attending Springdale Har-Ber, they attended the School of Innovation at the same time.

Girl’s high school wrestling in Arkansas is gaining momentum every year. Three more high school seasons for both of these phenomenal wrestlers will allow them to continue their dominance in Northwest Arkansas and throughout the state.

Coach Ronnie Delk, the wrestling coach at Rogers Heritage is originally from Oklahoma. He told us that the number of wrestlers in Arkansas continues to grow every year.

We recently had the opportunity to interview both of these outstanding wrestler’s to find out more about the beginning of their wrestling journey’s and their exciting futures.

The Varsity Report: How has your family helped you with your wrestling career?

Skylur: My family puts in a lot of time, effort and money to help me go far. My brother (who also is a state championship wrestler) gives me a lot of tips. My family is always looking to get me into tournaments that will make me better.

The Varsity Report: Where do you see yourself in the next five years?

Skylur: I want to wrestle in college and work on my premed degree. I would like to be a trauma surgeon.

The Varsity Report: Since transferring to Rogers Heritage, how have you improved as a wrestler?

The Varsity Report: Are there any other sports you play at the high school level?

Skylur: I did play softball when I was younger and I’m about to pick that sport up again.

The Varsity Report: Has there been another athlete or wrestler that you’ve looked up to and been inspired by?

The Varsity Report: What is your favorite TV show?

The Varsity Report: How old were you when you started wrestling competitively?

Archer: I was 10 years old. I wrestled boys for the first four years. Last year was my first year of just wrestling girls.

The Varsity Report: How have your parents been able to help you in your wrestling career?

Archer: My mom helps me when I have to cut weight. My dad got me involved with MMA and wrestling.

The Varsity Report: What’s your message to young wrestlers as they get into the sport?

Archer: I think wrestling is great because it’s such an individual sport. When you do something well in wrestling you know you did it by yourself even though you might have had help along the way.

The Varsity Report: What are your future plans involving your wrestling career?

Archer: I want to go to the Olympic Trials in Paris in 2024.

The Varsity Report: Coach Nika West has been a huge influence on your career but who else would you say has helped you the most?

Archer: Definitely Bianca Cook. She can lift more than most of the guys. She is very strong everywhere on the mat and organized.

The Varsity Report: How would you describe yourself as a wrestler?

Archer: I’m determined. If I fall down I can get back up. I can power through anything and I do a lot of quick thinking on the mat.